Last April I gave a talk bolstered by a PowerPoint document consisting only of a single Saul Steinberg drawing, which was essential to a point I was making. That single image was one more than I usually have. Speakers about to address an audience of designers are invariably asked to produce their “visuals.” “Visuals? I don’t even have actuals,” I say, or at least I did until I noticed that no one was amused. When my hosts discover that I really mean to show no images, the response is a disbelieving, “But designers are visual people!” 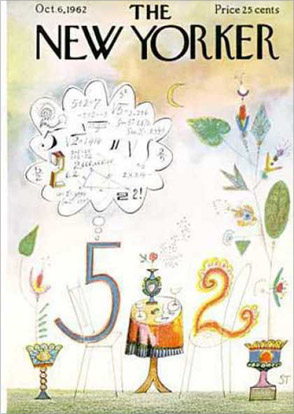 “Yes,” I say. “And that’s one reason I didn’t bring any visual support. Designers can see images in their heads. It’s your clients who need pictures—the clients who protest, ‘I never thought it would look like that!’ after you’ve explained at every step exactly how it will look, and have a stack of signed approvals as backup.” Since part of the design process is envisioning a result, the act of seeing is for designers a sharply honed skill.

Not everyone needs to develop that skill so finely, but designers are not the only ones who see pictures in their heads. A great many people, in a great many activities—reading, for instance—find they can supply their own visual support. Consider theatrical productions. A well-designed set can immeasurably enhance the experience of seeing certain plays. You can’t have drawing-room comedy without a drawing room. And the applause that greets the raising of the curtain on an empty stage is an expression of admiration for the set designer, irrespective of what follows. But if there is no set, there is a chance that a practiced audience can meet the production halfway without penalty.

The power of modern drama to work without sets or props may have been popularly demonstrated first when monologists, forced to travel without scenery, developed ways of compensating for its lack by using random bits of furniture to represent places and even people. Actors like Cornelia Otis Skinner and Ruth Draper were celebrated for one-woman shows in which they played all the parts, often without significant changes in costume—a hat or a scarf were suggestive enough—and often on a bare stage. By their ability to see what was not there, audiences colluded with the actors in evoking both an environment and the people who inhabit it. 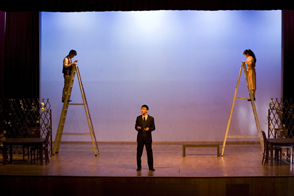 A staging of Our Town. (photo: Flickr user woonhian under CC license)

The effect was not lost on playwrights like Thornton Wilder, whose Our Town proved that if the play and the actors were good enough, the audience would rise imaginatively to the occasion. Our Town is narrated by a Stage Manager who, with the aid of chairs, tables and other objects at hand, creates a small New England town at the beginning of the last century. George Gibbs and Emily Webb, the protagonists, talk to each other through imaginary windows as they stand on ladders representing the second stories of their houses.