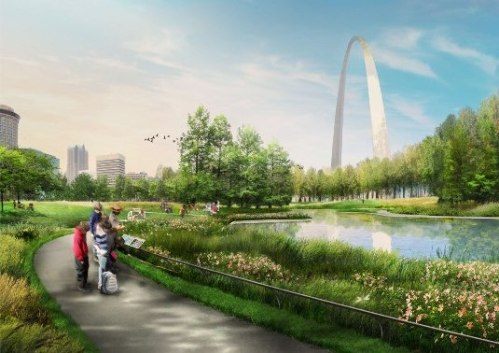 The Jefferson National Expansion Memorial is the 91-acre park that surrounds Eero Saarinen’s monumental Gateway Arch in St. Louis. While the Arch is a national icon, the park is completely cut off from the city by an Interstate  Highway in the west and a patch of wasteland across the Mississippi in the east. Crisscrossed by thoroughfares and mostly ignored by tourists, it has come to be seen as an obstacle to the development of St. Louis downtown. Ten months ago, The City + The Arch + The River competition challenged architects to use the park grounds as a way to renew the bonds between St. Louis and its most famous monument.

The five finalists were announced last month, and a design proposed by an interdisciplinary team led by Michael Van Valkenburgh Associates (MVVA) has just been declared the winner.

The MVVA team chose to forgo large dramatic interventions, and instead proposed a number of small but creative modifications and additions to the grounds surrounding the arch. Responding to what they saw as the three defining elements of the site – Light, River, and Horizon – the team hopes to keep the focus on the arch, but to allow locals and tourists a chance to also enjoy the environs.

Several of the features seem to be specifically designed to make people just spend more time wandering around. A single, centralized way of visiting the monument will be replaced by a multiplicity of activities. For instance, a large parking space will be replaced by three smaller ones in different neighborhoods. This not only makes for multiple approaches to the park, but will also bring tourist business through those neighborhoods. A similar philosophy underlies the other features – adding three new gathering spaces, relocating the museum entrance, and building a public transportation network.