Back in 1911, when auto racing was in its infancy, photography was still about cumbersome cameras, heavy tripods and temperamental plates. In the studio, that was fine, but bringing equipment to shoot a fast-moving, dusty and crowded automobile race was a significant undertaking. Nevertheless, several photographers recorded the racers and events of the first Indianapolis 500 race on May 30, 1911, and an evocative selection of their work can be found in the Indianapolis Motor Speedway’s vast archives.

1 – In a moment of far-reaching inspiration, Indianapolis Motor Speedway founding partner Carl Fisher decided it would be safer to let loose the 40-car field for the 1911 Indianapolis 500 from a rolling start – it’s believed to be the first in auto racing history. Naturally, he chose a Stoddard-Dayton road car to pace the field, since he was the local agent for the company.  Here, he takes a Stoddard-Dayton around the banking during track construction in 1909. 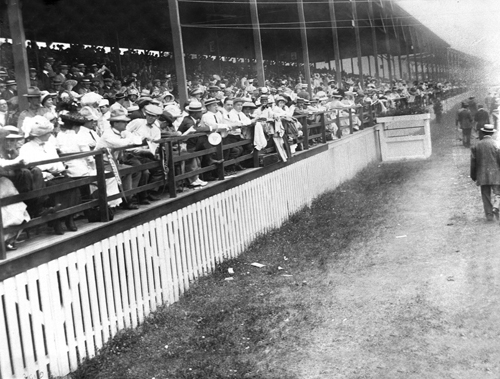 2 – Local newspapers put the raceday crowd for the inaugural Indianapolis 500 at 80,000. However, based on official estimates of 75,000 people passing just through the city’s Union Station railroad terminal, it’s highly likely that the actual figure was considerably higher.

3 –  Pre-start, the cars are lined up in rows of five, with Fisher’s Stoddard-Dayton (right) in the “pole” spot, ready to pace the field. Lewis Strang’s Case lines up next to it as first starter, thanks to the driver being the first to get his entry in. Despite the starting order being determined by one’s ability to post a letter quickly, all the cars did have to also conform to a minimum performance criteria: the ability to average 75mph over a quarter-mile, from a flying start. 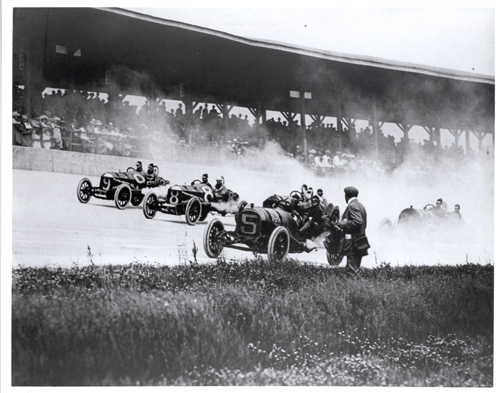 4 – Released by Fisher’s pace car, the field kicks up the dust as it heads into the first turn at the start. Of the cars tured, Louis Disbrow’s Pope-Hartford (car 5), Joe Jagersberger’s Case (8) and Will Jones’ Case (8) would all be out with barely 300 miles completed. 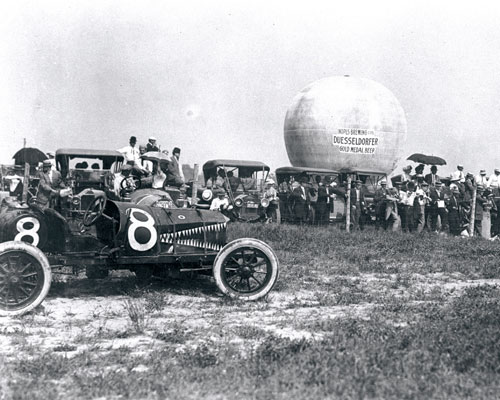 5 – Jagersberger parked his Case with accident damage after just 87 laps. Note the gas-filled balloon advertising the locally-produced Duesseldorfer beer – no doubt a great antidote to over 200 miles of dust ingestion, should the Austrian-American and his riding mechanic have taken advantage of it. Fact is, the latter probably needed one. When a tie rod in the Case’s steering broke, Jagersberger attempted to slow and park the car near the entry to the first turn, but his riding mechanic misjudged the speed, hopped out, lost his footing and was run over by its left-rear wheel  – thankfully with only minor injuries.

6 – Harry Knight’s Westcott (7) crashed out after 90 laps, but the No. 18 Fiat of Eddie Hearne (right) was running at the finish. In all 14 cars were classified non-finishers through accidents or mechanical failures. Despite dramatic predictions of multiple deaths in the run-up to the race, only one fatality occurred in the 1911 Indianapolis 500 – Sam Dickson, riding mechanic in Art Greiner’s Amplex. The unfortunate Dickson succumbed to injuries suffered when the Amplex rolled out on lap 13. 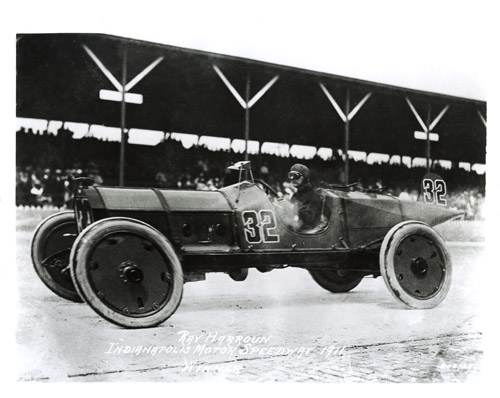 7 – Ray Harroun drove Marmon’s single-seat “Wasp” (so called because of its yellow and black paint scheme) in the 1911 Indy 500. The car had raced with some success in 1910, but that was in shorter races with smaller starting fields. Now, fitted with a more streamlined body, the Wasp drew cries of “foul” from its competitors, due to the lack of a riding mechanic to watch for oncoming cars. Harroun silenced them by fitting the first rearview mirror in racing. The forward-leaning wheels are an optical glitch, caused by the car moving through the shot as the camera shutter passed over the photographic plate (although the resulting effect is quite dynamic).

8 – Harroun takes the checkered flag and wins the first Indianapolis 500. The reserved, engineering-minded Harroun had to be cajoled into racing in the “500” but, once committed to it, he worked out a gameplan and stuck resolutely to it: lap at 75mph and save the tires. In the end, he stopped only four times over the course of the 500 miles – three of them to change the right-rear tire.

9 – Some, including the man himself, believed that Ralph Mulford was the real winner of the first Indianapolis 500. Mulford’s Lozier was certainly quicker than Harroun’s Wasp, but went through 14 extra tires in the course of the race, according to contemporary accounts. Adding confusion, the timing and scoring might have been disrupted in the aftermath of Jagersberger’s incident, which triggered a multi-car melee in its wake. But Fisher destroyed the timing records only days after the race, so we’ll never know with any certainty. Mulford remained politely adamant that the win was his right up to his passing in 1973. 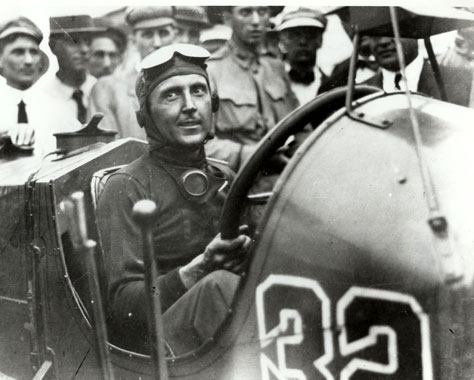 10 – Is that a hint of a smile? The quiet, reserved and utterly professional Ray Harroun sits in the winning Marmon. His winnings were $14,250 – a significant amount of money at the time. “The Little Professor,” who said that he raced purely to analyze the cars he designed or helped design, would go on to start his own passenger car company, which went into receivership in 1922. He remained involved in engineering for much of his life and died in 1968, aged 89.