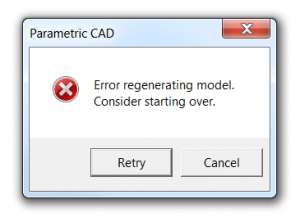 The modern era of 3D CAD was born in September 1987, when Deere & Company bought the first two seats of Pro/Engineer, from the still new Parametric Technology Corporation. A couple of years later, Deere’s Jack Wiley was quoted in the Anderson Report, saying:

“Pro/ENGINEER is the best example I have seen to date of how solid modelers ought to work. The strength of the product is its mechanical features coupled with dimensional adjustability. The benefit of this combination is a much friendlier user interface plus an intelligent geometric database.”

Read more of this sober, literate series by Evan Yares at 3dcadworld