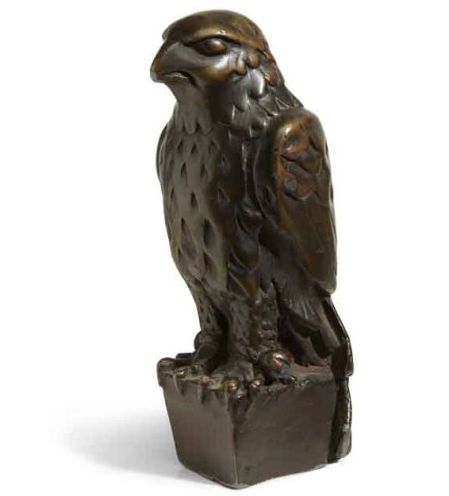 An iconic statuette used in John Huston‘s classic film noir The Maltese Falcon (1941) is set to headline Bonhams special auction, “What Dreams Are Made Of: A Century of Movie Magic at Auction as Curated by Turner Classic Movies” to be held November 25 in conjunction with Turner Classic Movies (TCM). In the legendary film, the statuette is a sumptuous gift from the Knights Templar of Malta to the King of Spain, brazenly stolen by pirates in the 16th century. Humphrey Bogart stars as a private eye who becomes entangled in a web of thieves and murderers, all determined to find the lost treasure. The title of the auction is a paraphrase of the movie’s famous last line, in which Bogart describes the falcon as “The stuff that dreams are made of.”
As the film’s namesake and a pivotal character in its own right, the statuette is arguably the most important movie prop ever, and no other prop can be considered as central to the history of cinema. This example, which has been in the possession of the same private owner for decades, is the only version known to have appeared in the celebrated film. The statuette has the proper Warner Bros. inventory number and an impressive exhibition history, including appearances at the Pompidou Centre in Paris, the Museum of Modern Art in New York, and the Warner Bros. Studio Museum in Los Angeles. It has never been to auction before.More Information