How a failed shopping trip for their mum inspired Suse and Anne Costello to launch an elder-design revolution.

Finding a cup that can be easily and elegantly held by older, uncertain hands—that was the mission of English sisters Susan (“Suse”) and Anne Costello who, in 2016, began their search for a two-handled cup able to support their 82-year-old mother’s unstable grip. Their quest would span years, bringing the pair from High Street to the outer reaches of the internet in a futile search for elder-sensitive design that would also be visually compelling. “We were genuinely shocked by the quality of the products available, and the generally low standard of merchandising,” explained Suse, a seasoned design professional, by phone from Hackney in London. “When we started looking at the landscape, we realized that these products were often poorly made, poorly designed, and the way they were being sold and merchandised was appalling—no thought whatsoever!” Feeling that discerning consumers deserved better, she and Anne conceptualized Eyra, a design platform that would showcase goods and products designed specifically for visually discriminating older users. This month, the team launches with a series of uniquely angled handles and kitchen utensils created in collaboration with famed British industrial designer Sebastian Conran, now available on Kickstarter.

Before Eyra, Suse had worked for decades in the design industry, starting at famed branding agency Wolff Olins before moving on to roles as a digital development director and marketing consultant for luxury consumer and elite sportswear firms. She’d never given much thought to designing for the 60-and-over crowd who, incidentally, are also frequently overlooked by advertisers and brands. Seeing her mother, known for her exquisite taste and refined aesthetic sense, consigned to a world of plastic and generic goods, Suse sensed an opportunity to do something meaningful in the retail sector. Along with Anne, whose decades of experience as the operations and resource director at THIN (a medical research firm) had given her a sixth sense for medical systems and standards, they committed to creating a functional but visually striking line of senior-oriented products.https://tpc.googlesyndication.com/safeframe/1-0-37/html/container.html

“As you age, things that would be easy to do daily become harder,” laments Suse, referring to mundane tasks like opening jars, getting in and out of chairs, and even “holding steady on your feet.” But many of the products for this market are not only standard issue, but bulky and unnecessary. “You notice that older people’s homes tend to get cluttered with stuff—things that occupational therapists, well-meaning friends and family give them, or their doctors advise them to have around. These are the things people feel they have to have—but do they want to have them?” She questions the adverse mental and physical health effects of being surrounded by terminal drabness. “The items we surround ourselves with contribute to our well being,” she adds. “Beautiful things make us happy, and the reverse is also true. If you spent your younger life around beautiful things, why would you now want to be surrounded by so much beige?”

To create Eyra, the pair drew on a range of inspirations, from Lanzavecchia + Wai’s ‘No Country for Old Men’ walking cane line to scouting trips at Naidex (Europe’s biggest trade fair for Daily Living Aids) and Rehacare. But the ‘New Old’ exhibition at the Design Museum, featuring design that enhances the “experience of our later lives,” was a powerful influence. The show introduced the pair to the higher end of healthcare design with pieces like Priestman Goode’s Scooter for Life, Paro’s robotic seal, the Aura Power Suit by Yves Behar, and MiRo by Sebastian Conran, their future collaborator.

Suse later met Conran at an industry event where the two bonded over their mutual interests. Conran, who had previously worked at Mothercare, a one-stop-shop for “beginning of life” goods, had cut his teeth designing for babies and toddlers, and now hoped to create a brand aimed at older consumers. For his Eyra collection, Conran created a pasta grabber, a serving spoon, a spatula, and a slotted spoon, and he’s currently working on a set of tableware, a chopping board and, yes, a cup with two handles for older hands.

To round out the team, the Costello sisters enlisted Eve O’Sullivan, an occupational therapist, for critical input. Eve, who works in client-centered rehabilitation for the elderly and people with life-changing neurological conditions, had previously noticed that her clients were always looking for better-designed products, often refusing to use items which, although necessary, were at odds with their personal visual aesthetic. Many of Eyra’s modifications come out of this collaboration, including a magnetic rack meant for easy retrieval, and utensils designed specifically for those with reduced mobility in their hands and wrists. The handles of the utensils, optimally shaped and weighted, are coated with a soft rubber specifically chosen for its anti-slip properties. 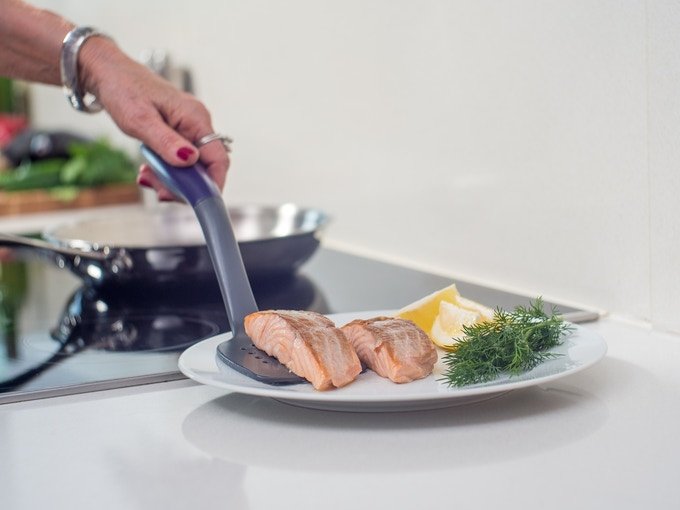 The team launched with these utilitarian products feeling they could be useful to a wider market—not just those experiencing difficulty with their hands. On the horizon, Eyra has several new kitchenware projects planned with established creators and product designers. Ultimately, they want their products to be judged as beautiful objects of art, not merely as practical aids. “Becoming older doesn’t mean losing our sense of style,” Suse explained, “our ability to express ourselves creatively grows with age. This is why artists don’t retire! They continue to express themselves creatively, as I think one does as one gets older and, in fact, probably even more so.” She points to brand inspirations Iggy Pop, Mick Jagger, and Vivian Westwood as her ideal users. “If you are the kind of person who has surrounded yourself with things of quality in your life, then it makes sense that you would continue to do that as you age.” Ultimately, she believes great design not only enhances our lives but infuses them with joy. “Beautiful things make you happy, and ugly things make you sad and depressed. It’s all a bit Marie Kondo, isn’t it?”