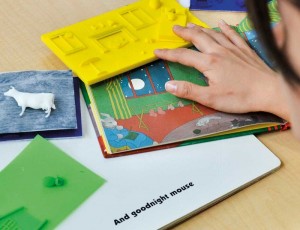 Tactile books include 3D images on pages that can be printed at home to help visually impaired children get a feel for popular children’s books.

It’s become customary to say that 3D printing is moving beyond “the printing of trinkets,” meaning the process is now used for much more than the customizable key chains or toys of a few years ago.

On the other end of the printed-trinket continuum are 3D-printed parts’ use in airplanes and medical devices. Somewhere in the middle resides the area beneficial to the public, but not highly technical. In fact, many things printed in 3D aren’t a part at all, and could become mainstream in the near future.

For instance, the Tactile Books Project, lead by Tom Yeh and the Colorado University at Boulder’s Sikuli Lab he directs, recently printed the popular children’s book “Goodnight Moon” in 3D to allow visually impaired children to touch objects in the story as the book is read aloud.

Now Yeh and his team are using the same techniques to print several other popular children’s books in 3D, including “Harold and the Purple Crayon” and “The Very Hungry Caterpillar.”

The team creates computer algorithms for images from the books. The mathematical algorithms offer a way for parents, teachers, and supporters to print their own customized picture books using 3D printers. The main idea is to represent 2D graphics in a 3D, tactile way appropriate for the cognitive abilities and interests of young children.

But the project isn’t as straightforward as creating the algorithms. The images need to be chosen and created for each page and parents and others need to be trained on how to print the books. They also need access to 3D printers, Yeh says.

“Since each child generally has his or her unique visual impairment issues, the idea is to customize each book for each child,” Yeh says. “We’re investigating the scientific, technical and human issues that must be addressed before this vision can be fully realized.”

The idea of tactile picture books is not new.

“What is new,” Yeh says, is making 3D printing more accessible and interactive so parents and teachers of visually impaired children can customize and print these kinds of picture books in 3-D,” he adds.

Food may seem a distant relative to books, but even the things we eat can be printed in 3D. For instance, Copenhagen-based design studio Space 10 has created a 3-printed meatball made via a unique production technique.

“It’s quite difficult to picture that in the near future we will be eating insects or artificial meat. But, with the increasing demand for food, we need to start considering adding alternative ingredients to our daily menu,” said Bas van de Poel, one of the project’s creators.

The 3D printer turns plentiful proteins—but those that don’t appeal to Western tastes, such as algae and insects, into appetizing foods products, like the meatball (which is not actually, obviously, a ball of beef or pork), says van de Poel. The protein sources are synthesized and then printed into a round shape, he says.

And many have heard that clothing can be printed in three dimensions. Even high-end clothing is getting the printed treatment.

For instance, the High Museum of Art in Atlanta has just opened an exhibit of the work of Iris van Herpen, a Dutch designer recognized as a pioneer in the 3D printing of clothing.

The exhibit shows the designer’s fashion statements and demonstrates how she incorporates materials like magnets, umbrella ribs, and boat rigging into her futuristic pieces.

For the show, which runs through May 2016, custom-made mannequins display 45 pieces from 15 collections. The text next to the pieces explain van Herpen’s creation process and her inspiration for the piece.

Sure, the thought of a printed ball of some type of meat or of an outré printed dress doesn’t appeal right now. But stay tuned. We’re still at the beginning of this revolution. We could be eating and wearing 3D printed products in the future without a second thought.