This year’s SOLIDWORKS World saw the launch of Apps for Kids, a collection of programs designed to get kids between the ages of 4 and 14 into STEM. 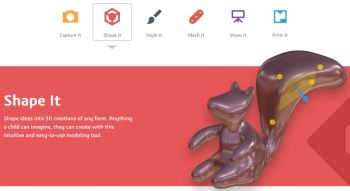 “We won’t say you have to use this tool to learn to be an engineer. We are instead going with a little math, geometry, art, and then say kids will want to have fun,” said Marie Planchard, director of education portfolio at Dassault Systèmes SOLIDWORKS. “If they get interested in engineering, it’s not going to be right in their face. The first thing you want to do is engage students to have the ability to be creative.”

These six new apps have compartmentalized the functionality and simplified the graphical user interface (GUI) of the SOLIDWORKS platform.

The apps will include:

“You can use all of these apps together,” said Planchard, “which is the really cool thing.” As a result, parents won’t have to worry about transferring data between the apps. They should be able to access the models in whichever app they open.

How Will SOLIDWORKS Apps for Kids Engage Kids?

“Apps for Kids is taking this concept of CAD and product design, so if I were a young child I can focus on one app and not be intimidated by engineering CAD,” said Chinloo Lama, a senior user experience design engineer at Dassault Systèmes SOLIDWORKS. “I’ll say, ‘there is an app that lets me color on cool shapes,’ and go to town on it without knowing I will be learning about something that can lead to a future computer animation job. They will learn a standard they would not have otherwise learned.”

In other words, this isn’t about enforcing tool tips or online help for the kids. These apps will use informative icons so that children too young to read, or new to English, will be able to understand what an icon will do from push and pulling a surface to coloring a face. When English is used, it will consist of words, icons and tools kids are more familiar with, such as stickers instead of decals. However, the challenge here will be making sure that the apps are still cool enough for the teenage target audience.

“We have done a lot of research studying gaming and social media that children are jacked into,” said Lama. “This idea of learn-as-you-do in the apps, kids are familiar with. There is no longer any help documentation. We are looking at a lot of video and picture-in-picture as a kid will look at YouTube and templates to get ideas. These elements will be injected as user assistance, but not the traditional help menus.”

Lama explained that what they have learned to simplify the user interface in Apps for Kids will also lead to improvements in the professional SOLIDWORKS platform used by traditional engineers and designers.

Another popular aspect of current apps targeting youth is gamification and community involvement, as in the case of the building video game Minecraft.

As a result, a community will be set up where kids can share their designs. Other kids can then use and riff on these shared models, modifying and decorating them to their own liking.

However, given the age gaps between users, there will be a risk that some inappropriate designs will be produced by older kids that the younger audience might encounter. Similarly, personal information of these young users will also need to be protected. Dassault Systèmes SOLIDWORKS representatives have noted that they will be looking into third-party solutions to reduce these risks and police the apps.

What Kids Will Benefit from SOLIDWORKS Apps for Kids?

These apps are being marketed to groups to fill in the engineering gender and economics gap. For instance, though it’s possible to print your 3D model, you won’t have to shell out the money for a MakerBot.

“You don’t need a 3D printer,” assured Planchard. “At age 4, the number one tool you have to make something is a pair of scissors, so we want to make sure the kids can lay out patterns from the designs they can create, print the patterns and stack them in cardboard to make a 3D animal for instance.”

If you do have a 3D printer, or are looking to get one to use with these apps, then Sindoh is your best option. Dassault Systèmes SOLIDWORKS has been working with their new partners at Sindoh to make sure that their 3D printers will be able to print models directly from these apps. However, if a 3D printer isn’t in the budget, Dassault Systèmes is also researching service companies to have kids get their models printed and delivered to them.

“The goal is not to make money on this. It’s about engaging early with the kids. As future engineers we will make money when they are able to pay on their own,” explained Suchit Jain, vice president of strategy and community at Dassault Systèmes SOLIDWORKS. “But, with that said, we don’t know the exact details [of] how we will launch it with schools, but we will figure this out.”

Given the focus of last year’s SOLIDWORKS World  to get women into engineering there is no surprise that girls are also being targeted for Apps for Kids. As a result, the apps are moving away from the traditional engineering education examples.

“I’m pushing to get young girls into STEM, and sometimes the projects introduced to kids as they are older in middle school and high school have more of a boy flavor, like making a balsa wood car or a bridge, and maybe those don’t excite you. But with Apps for Kids you can think about anything you have a passion for to create. Like whales, you can model a whale, print a whale, document them and present them in a really cool way.”

To learn more about SOLIDWORKS Apps for Kids, follow this link. Parents can then register for the beta, which is set to launch in March.