A functional, well-designed item is a luxury, says Tim Prestero, founder and chief executive officer at Salem, Mass.-based Design That Matters. It’s not that functional items are hard to come by, but in impoverished areas of the world those items may not be designed to fit users’ needs.

Medical equipment tends to be prohibitively expensive in the rural areas of developing countries, so it is often donated to hospitals and clinics. But the equipment often comes straight from the Western world without being adapted to third world use or the unique circumstances of the physicians, nurses, and patients who will use it, Prestero says.

As a result, products—like those that could save a baby’s life—may never be used by busy medical professionals who don’t have time to learn to use a complicated, but well-intentioned device or who don’t fully understand how the equipment is intended to help a newborn thrive. 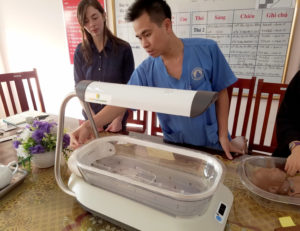 Design That Matters (DTM) intends to change that. The nonprofit’s goal is to design lifesaving devices that—because they will see everyday use–will actually save lives.

Take the Firefly Phototherapy device for newborns that DTM created. With the Firefly, rural hospitals in the developing world with limited resources and inexperienced staff can successfully treat jaundice in newborns, says Malory Johnson, the nonprofit’s industrial design fellow. 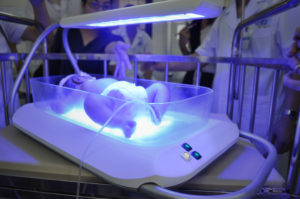 DTM works with student volunteers who are working toward engineering and business degrees. The 1,200 students that work at the nonprofit earn college credits in return for their ideas.

“After all, the best way to have ideas is to have a ton of ideas,” Prestero says.

The students’ mission isn’t so much to completely design a medical device from the ground up as to perform what Prestero calls “content adaption.”

For example, there are treatment devices to halt jaundice in newborns. For Prestero, why not adapt those devices for the rural hospitals DTM serves rather than expect their medical staff to use a device from a Western country that serves a vastly different population?

DTM is the recipient of an Autodesk Foundation grant, so engineering and design students use cloud-based Fusion 360 computer-aided design software from Autodesk for design. The nonprofit also uses SolidWorks CAD software. The students communicate across campuses through the CAD systems in the same way engineers in different departments or at different locations of the same company exchange and hone ideas.

The CAD software combined with tools like 3D printers–available at a Boston FabLab with many fabrication tools to create physical prototypes—enable a small team of designers and engineers to create and launch products quickly and efficiently, Johnson says.

During the 2016 fall semester, students from Olin, Babson, and Wellesley colleges, all near Boston, worked with DTM. Babson College is a private business school in Wellesley, Mass. The students worked to perfect and create a market analysis for a product already underway at DTM: the Otter baby warmer. This incubator is an offshoot of an original baby warmer design called the NeoNuture.

Each year nearly four million infants die within a month of their birth in resource-poor settings due to infection, low birth weight and other health factors. But half of those kids would make it if you can keep them warm during their first week. In developing countries, many newborn wards use blankets or other means to keep babies warm—but not warm enough, even as complicated and costly donated incubators stand nearby, Prestero says.

The Otter Newborn Warmer provides a warm, clean environment that could avert close to one-quarter of those deaths by preventing hypothermia in under-resourced district hospitals, Johnson adds.

The student volunteers and DTM staff conducted an initial market analysis and then created a few prototypes of the warmer. The students helped develop a “hard to use wrong” interface, a thermal regulation subsystem, manufacturing plans, and financial projections leading to production.

The Otter reflects the hard lessons learned from that first stab at designing for a culture and environment foreign to the designer’s own, Prestero says. In fact, the Otter incubator design led to the development of the Firefly Phototherapy device. The nonprofit is now circling back to perfect its original baby warmer, then called the NeoNuture. 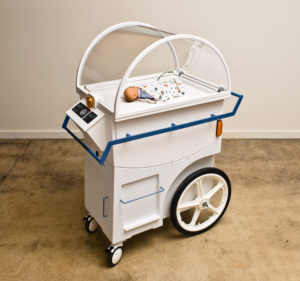 Though Prestero’s team had spent hours speaking with NeoNuture’s eventual end users to determine what they sought, the incubator still failed to go into production, he told the audience in a June 2012 TEDxBoston talk.

“When we were designing NeoNuture we paid a lot of attention to the people who were going to use this thing,” he says in the talk. “But it turns out, there’s this whole constellation of people who have to be involved in a product for it to be successful: manufacturing, finance, distribution, regulation.”

As the DTW staff later discovered, rural doctors in developing countries don’t actually buy their own medical equipment. It’s either donated or is purchased by the country’s health agency, Prestero says.

The health agencies weren’t lining up to bring in NeoNuture incubators, he said, and, as a result, DTW couldn’t find a manufacturer.

For its next go-round, DTW first found a manufacturing partner in Vietnam, MTTS, which makes newborn care technologies for the southeast Asian market. It also teamed with East Meets West, a U.S. agency that distributes the technology.

Next, Prestero’s team asked the manufacturer to delineate a problem it’d like to solve through technology. Employees had an immediate answer: newborn jaundice. This problem would be addressed by adapting current technology to more closely fit the need, resulting in the Firefly Phototherapy device.

Jaundice affects two-thirds of newborns born around the world, Prestero says. For one in ten babies, the jaundice becomes so severe it leads to lifelong disability or death. One simple cure: “Shine a blue light on as much of the kid’s skin as you can cover,” Prestero says.

In the United States, an overhead phototherapy device is widely used to treat jaundice. But nurses in impoverished countries often place three or more babies under a single lamp. None of those babies are directly under the light, so they don’t benefit from its rays.

“But without training, without some kind of light meter, how would you know that?” Prestero asks.

Also, mothers with babies under the lamps—who don’t entirely understand its use–often see their tiny, naked baby and instinctively put a blanket over their baby, blocking the blue light from reaching the skin, he says.

After hearing about the problem, DTM developed its Firefly Phototherapy device. Because a single bassinet is permanently attached to the lamp, only one baby at a time can use the equipment. And because the blue lamps are located above and below the bassinet, babies covered in blankets can still receive the light. And because bugs enter the equipment with disturbing regularity, causing malfunction, the device is totally sealed for hygiene, Prestero says.

“We talked with the manufacturer, and they could actually make it with the resources they have access to,” he adds.

The Firefly has successfully launched, so the DTM team has turned its attention back to its original baby warmer, which will be called the Otter Newborn Warmer.

In early December, the team wrapped up a one-week field study in northern Vietnam. DTM wanted to test the Otter Newborn Warmer prototype with doctors and nurses and with the DTW manufacturing partner, MTTS.

“We took thousands of photos, shot hours of video and collected a mountain of notes. We’re just getting started on the process of data-reduction,” Johnson says.

The team used ThinkPads laptops from Lenovo to make design changes within their CAD systems in the field and on the fly, she adds.

But some things work best low-tech. The team also used what Johnson termed “a blizzard of Post-It Notes” to track ideas.

The cloud-based CAD system, the laptops for use in the field, even the Post-It Notes all add up to what Prestero calls the democratization of design. That is, affordable design. None of those tools are expensive and are accessible to everyday designers, he says.

And that, he says, leads to equipment and tools that can aid even the poorest in the world.

Designing for a new mindset

The hard-to-use-wrong sentiment used by DTM mirrors that of another organization that develops products for third-world environments. Compatible Technology Inc., (CTI) of St. Paul, is comprised of engineers and food scientists who face a unique challenge: to determine the tools farmers in rural, developing nations need and want and to design, “as best they can,” tools for those needs, says Alexandra Spieldoch, the nonprofit’s executive director.

The “as best they can” part comes into play because it’s difficult for Minnesotans to understand how the population they design for will use the tools.

It’s the perfect example of a seemingly simple problem but one difficult to solve for those in developing countries without means, materials, or background information, Spieldoch says.

Over the years, volunteers have come up with a number of solutions, including corn processing and storage methods for Guatemalan farmers, a simple food grinder that can be easily flown to a remote location and set up by villagers, and a potato dryer and other potato processing equipment.

These may sound basic, but consider that the potato equipment, which consists of a peeler, slicer, blanching vat, stove, and drying racks, prevents surplus potatoes in parts of India from rotting before their economic value can be realized.

Just knowing about those rotting potatoes spurred CTI members to action. CTI continues to revise its tools as new information about how they’re used in the actual field makes its way back to Minnesota. In much the same way, the DTM baby warmer is an updated version of one of that nonprofit’s first designs.