The Design Evolution of Car-Based Pickups, Part 1: Invented in Australia

“Form follows function” is what they taught us in design school. But when I look at modern products–furniture, cars, bottles, consumer electronics–it seems many designers aim to make something look “different,” just for the sake of being different. Zig zags, arbitrary curves and surfaces with no relation to each other seem to have been added purely because the designer’s CAD package made such forms possible.

In contrast, I find it both fun and educational to look back at a time when industrial design was in its infancy, and the established form factors of today had yet to be worked out. Everything from the individual taste of the designer, to global economic conditions, to local idiosyncrasies, to sheer manufacturability could influence what lines made it onto the page and subsequently into factory production.

For today’s example we go back to a dusty farm in Australia weathering the Great Depression. The combination of the farmer’s wife being literate, and Australia having an established postal system, were unwittingly about to spark the creation of an entirely new form factor that persists to this day.

In the 1920s cars in Australia, as elsewhere, were an expensive luxury, but local banks made them affordable by offering credit. That is, until the Great Depression of the 1930s hit. At that point, the banks yanked credit programs for cars, though left them intact for working vehicles for farmers. That’s tractors, riding machinery, and this new thing called a “pickup truck,” which was a Ford Model T (later A) modified to carry a cargo box on the back.

Pickup trucks back then weren’t like the pickup trucks of today. Rough-riding, utilitarian and largely open-air, these were used for actual work, not the double-duty family outings they’re used for today. And this arrangement dissatisfied at least one farm-based married couple in Gippsland, Victoria in 1933. The wife of the couple broke out some stationary and wrote a letter to Hubert French, the managing director of the Ford Motor Company of Australia:

“My husband and I can’t afford a car and a truck,” her letter read, “but we need a car to go to church on Sunday and a truck to take the pigs to market on Monday. Can you help?”

French could’ve crumpled the letter up and thrown it in the garbage, but instead he passed it on to his sales manager, Scott Inglis. Inglis then forwarded it to Slim Westman, the plant superintendent. Westman brought the letter to a 22-year-old kid named Lewis Bandt, who was Ford Australia’s sole designer. They apparently deemed the farmer’s wife’s needs relevant, and started a discussion: Could they design and produce something that would fulfill this requirement? Was it possible for a car to do truck duty? How heavy is a pig? 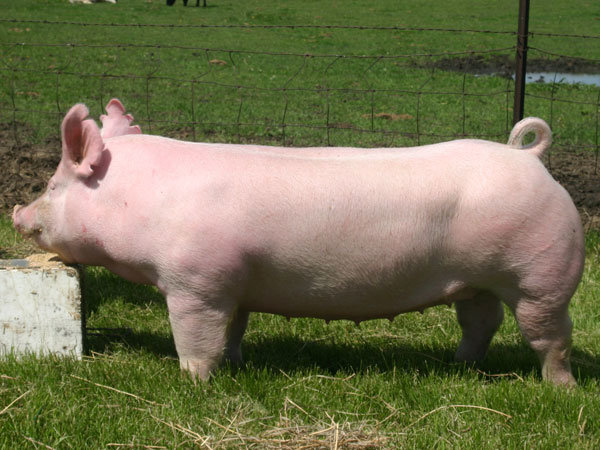 “Westman quite rightly reckoned that if we cut down a car and put a tray on the back, the whole thing would tear in half once there was weight in the back,” Bandt later said. “I told him I would design it with a frame that came from the very back pillar, through to the central pillars, near the doors. I would arrange for another pillar to further strengthen that weak point where the cabin and tray joined. I said to Westman `Boss, them pigs are going to have a luxury ride around the city of Geelong!'” 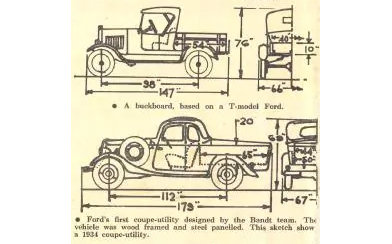 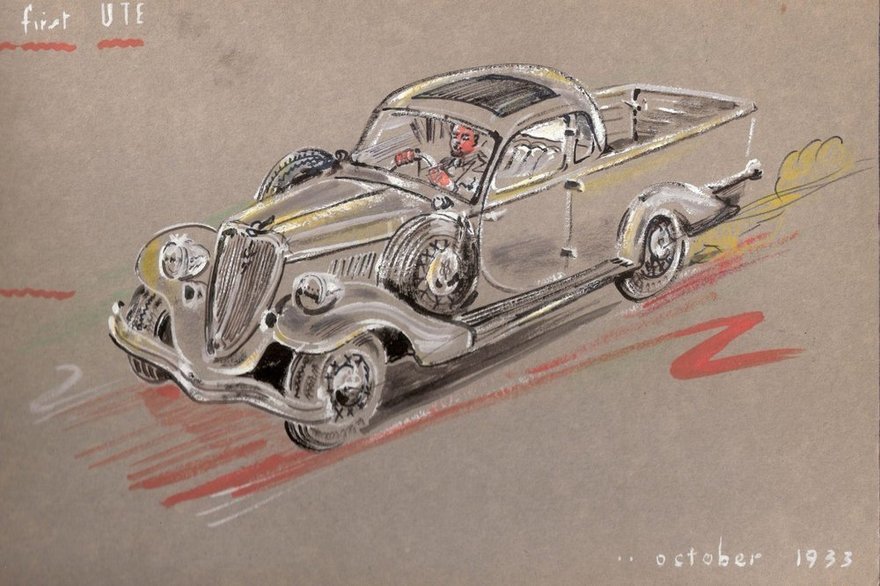 Bandt began working his ideas out in 1:1 scale, drawing orthographic views on a massive 30-foot-long blackboard. He showed the completed design to Westman, who then authorized the production of two prototypes. 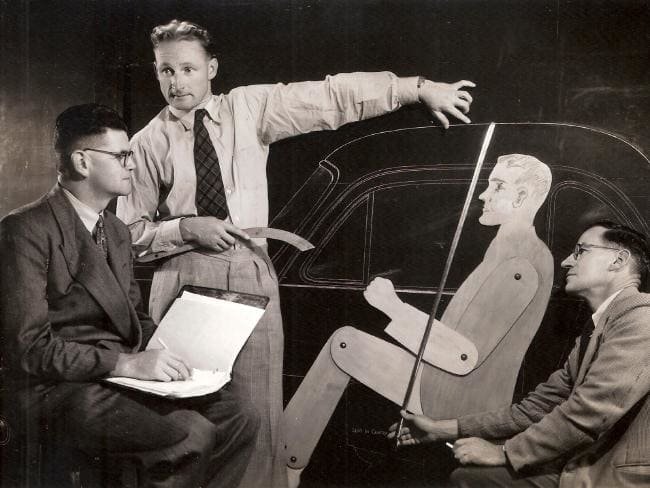 Bandt (standing) in 1933. Behind him you can see the blackboard on which the full-sized drawing was done.

The prototypes were shown to Inglis, who green-lit £10,000 for tooling and a limited production run of 500 units.

In January of 1934 the new Ford Coupe Utility, based on the Model 40 coupe, started rolling off of the assembly line. 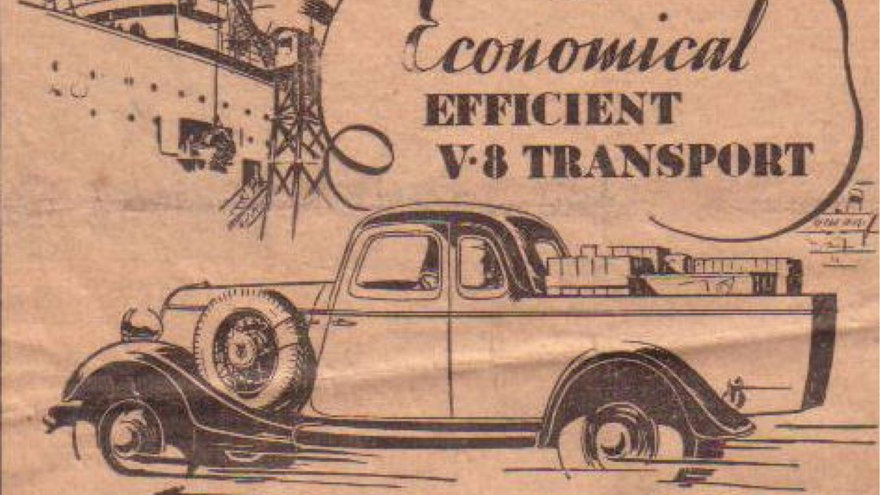 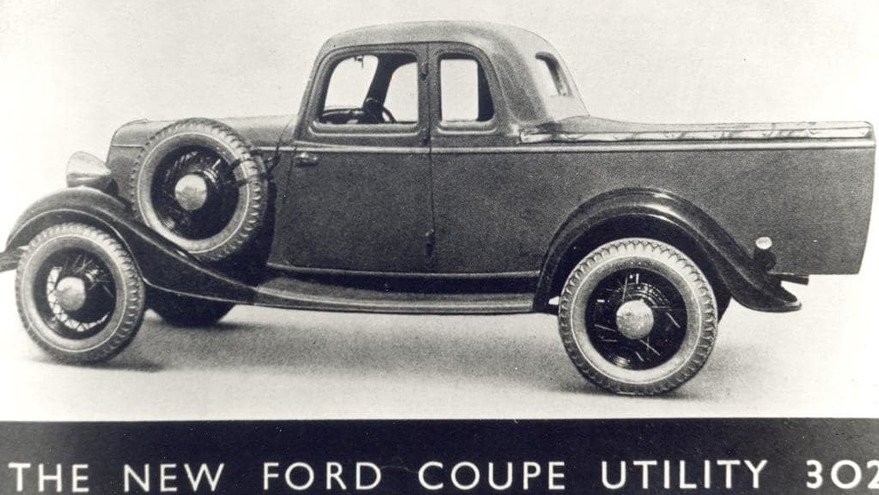 It had the face of a car–respectable, church-parking-lot friendly–yet could indeed haul pigs (or any weight up to 1,200 pounds) in the rear, strengthened by Bandt’s monocoque design and powered by Ford’s V8 engine. Business in the front, party in the back, this was an early automotive version of a mullet. 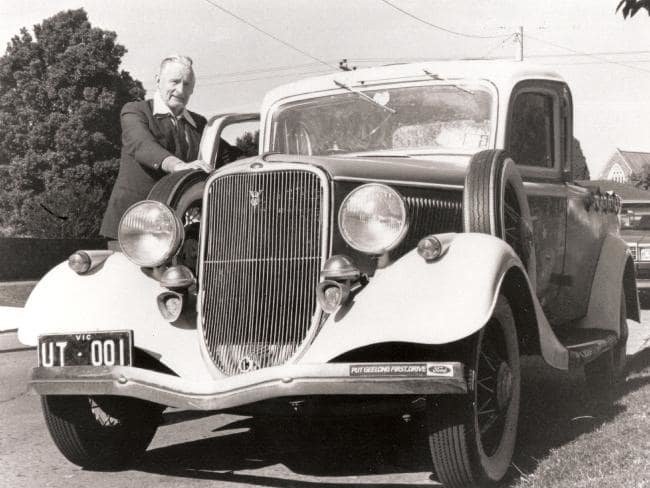 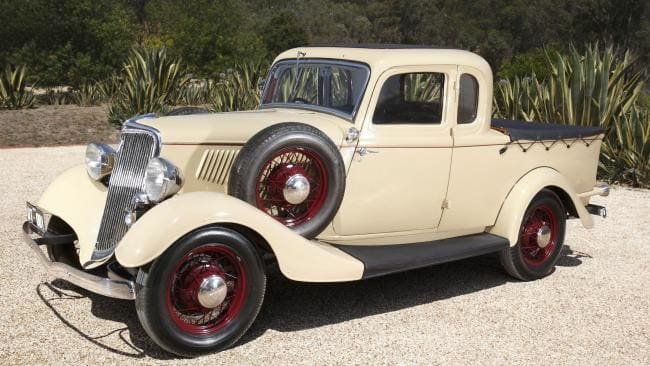 To our 21st-Century eyes, it may be tough to recognize this vehicle’s design victory. To understand what Bandt had achieved from a design perspective, look at this 1931 Ford Model A pickup truck: 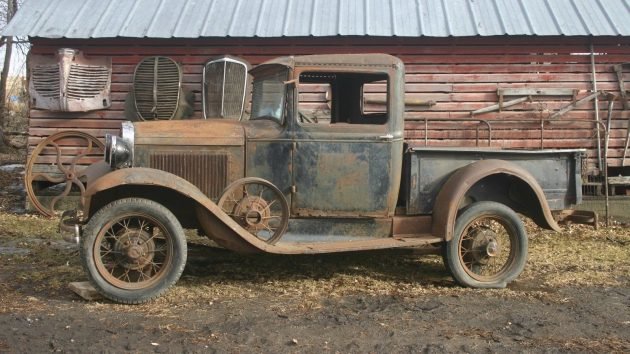 You can see how the passenger cabin and the truck’s bed have little to do with each other. In contrast, look at how Bandt connected the cabin and the bed’s sidewalls into a continuous form, not just for looks, but for strength: 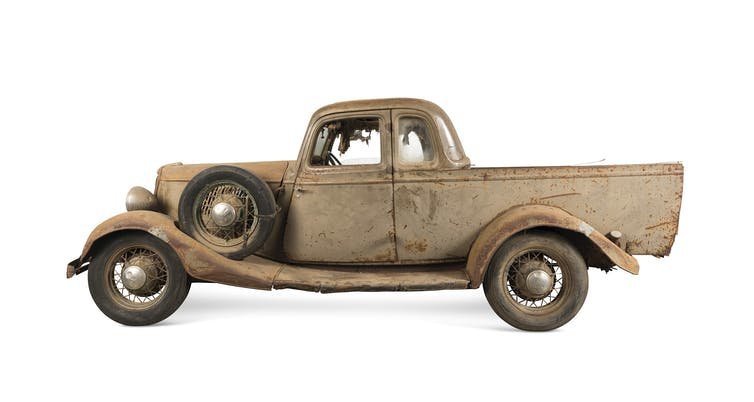 The one in the photo above is admittedly in pretty rough shape. To get an idea of what Bandt’s design looked like new, check out this restored version:

Bandt had essentially created a new automotive form, and one that became particularly popular in Australia and New Zealand. “Utes,” as they were called, gained a firm footing throughout the 1930s and ’40s. 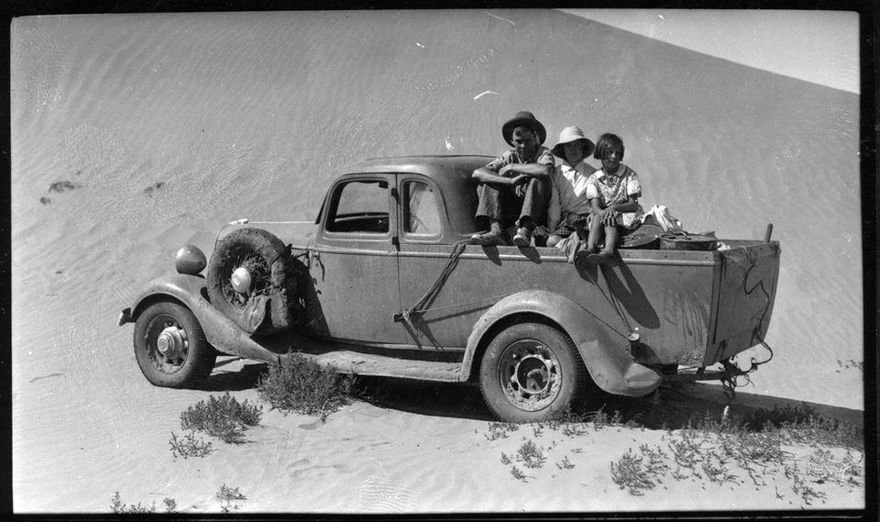 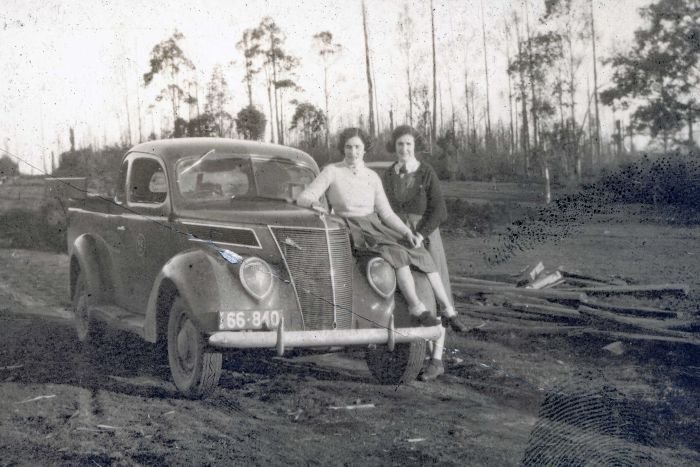 You’ll notice that the restored yellow car in a photo above has a door handle in the modern position. However, the car was originally designed with “suicide” doors, as was common at the time. Here’s a photo of Bandt, decades after designing the original ute, alongside a restored one: 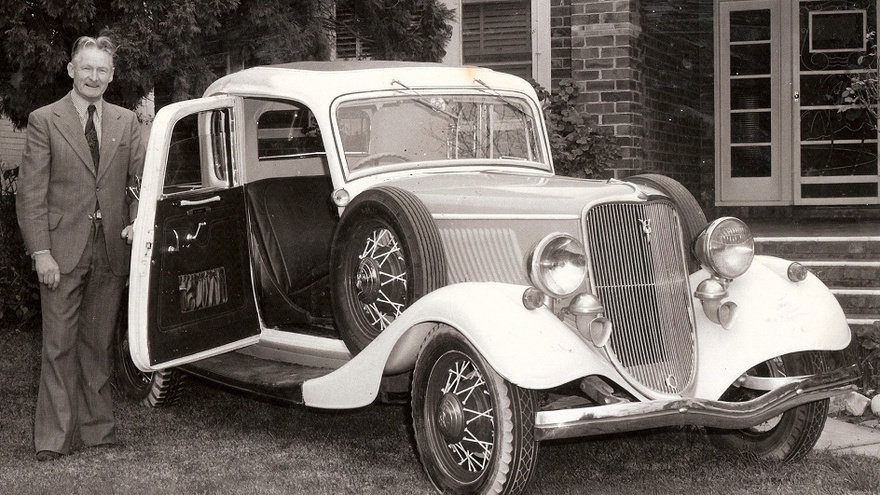 Bandt’s story ends tragically. He put in a full career as a designer for Ford, retiring in 1975. Some eleven years into his retirement, he managed to find an original 1934 Coupe Utility and restored it. In 1987 he was driving it home from the Australian Broadasting Corporation’s television studios–where he was being featured in a documentary about utes–and got into a head-on collision with a sand truck. Ironically, Bandt died inside of one of his most influential designs.

Up next, we’ll look at the incredible profusion of vehicle designs that Bandt’s creation unwittingly kicked off.

via Core 77 and Rain Noe

Rain Noe is a writer and industrial designer based in New York City.